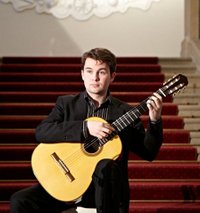 Described as 'a star in the ascendant', Ian Watt first came to international attention when he was awarded 2nd prize (silver medal) at the 2009 Parkening International Guitar Competition (USA).  Since then, he has appeared as a soloist throughout Europe and world. To date, in addition to the UK, Ian has performed in the USA, China, Germany, Austria, Czech Republic, Hungary, Ukraine, Denmark, Holland, Estonia, and Belgium and as a concerto soloist with the BBC Scottish Symphony Orchestra,   City of London Sinfonia and Scottish Philharmonic Orchestra.  A lecturer in guitar at the Royal Conservatoire of Scotland, Ian is also increasingly in demand as a teacher, regularly giving masterclasses internationally, most recently in China (at the Central Conservatory in Beijing), Germany, Hungary and the Czech Republic.

As well as his performances on BBC Radio, Ian has recorded two solo albums, Invocación – Impressions of Spain and Britten, Walton, McLeod, Wilson and Dowland with Nimbus Records, which have been described as 'outstanding' and 'sublime' by the musical press. In 2007, at 16,  he participated in a BBC 2 competition which included a performance of Rodrigo’s Concierto de Aranjuez and his performances have also been seen and heard on television and radio stations in the USA, Austria and Holland.

A keen advocate of contemporary music, Ian has worked extensively with John McLeod, premiering all of his guitar works (including the premiere recording of Fantasy on themes from Britten’s Gloriana) as well as editing them for publication. Ian also has an interest in performing rarely heard works and in 2009, he took part in Peter Maxwell Davies’ 75th birthday celebration concerts in Glasgow, giving a performance of the ‘Dark Angels’ song cycle for voice and guitar in the composer’s presence.  More recently, Ian has begun to promote music by the late Thomas Wilson, making the first recording of his 1980 composition, 'Dreammusic'.